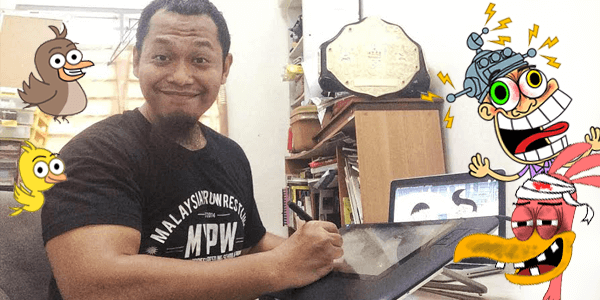 Alif aka Alifstyle, has always had a sense of humor. His entertaining YouTube videos are actually how he discovered Fiverr, when one commenter suggested it to him. His career immediately took off and Alif was able to retire from his career in comic book editing, to start his own business and spend more time with his family.

I love cartoons, animation, wrestling and magic. I'm married and have two sons. On Fiverr, I offer Gigs in cartoons and animation.

How did you get into animation?

My first year at Fiverr, I was just doing cartoon illustrations, until one day, one of my clients from Fiverr asked me to draw character poses and props for his animation. I did the drawing and then he animated the cartoon. After seeing the result, I was so excited to see my cartoon come to life. In fact, the client said the animation would be broadcasted on TV in Africa! The client really inspired me. I dreamed of becoming a great animator like him someday and wanted to learn to animate cartoons on my own. A month later, I went to study animation at a local college for 8 months. I worked and studied simultaneously, working at Fiverr to support my family. It was a tough time in my life, but it was really worth it.

How did you hear about Fiverr?

I heard about Fiverr after one of my YouTube viewers suggested I try it. The first time, he suggested I do something like, hold sign or do something funny for a Fiverr Gig. At that time, I was always doing funny stuff like singing and doing silly Magic on YouTube.But, once I signed up at Fiverr, I chose to only do cartoon illustration. I'm more confident doing cartoon illustration instead of live action in front of the camera. :)

How have your animation skills grown since joining Fiverr?

I’ve learned so much from working at Fiverr. I’m always receiving challenging tasks from clients. I learn something new with every new task I receive.For example, I recently started doing whiteboard animation. That animation is just showing a cartoon pose in static, but after receiving many requests, I can now do more complex animation like walking, talking and other basic actions.

Can you share a favorite project you've worked on?

Yes. Sure! Here’s a compilation of some projects from last year.

What’s your advice for a Fiverr newcomer?

Try to provide outstanding service and do the best work you can. Remember, Fiverr is a business just like any other business. It needs passion and hard work for success. I meet many newcomers who are excited about Fiverr during their first week, but after that, they give up. The main reason is because they think Fiverr is an express money maker, but forget Fiverr is just a platform and they themselves need to offer a good service and work hard.

What impact has Fiverr had on your life?

Before working at Fiverr, I was a professional comic book editor in my country for almost 8 years. I made a good salary from my old job. But, after about four to six months on Fiverr, I retired from my old job and was doing my Fiverr job full-time.From Fiverr, I’ve learned so much about the art of making a deal and time management. I love what I’m doing now because I have much more time for my family and hobbies.Thank you Alif for sharing your story with us! If you’d like to share your story about how Fiverr has impacted your life, please send it to us by email at community@Fiverr.com.