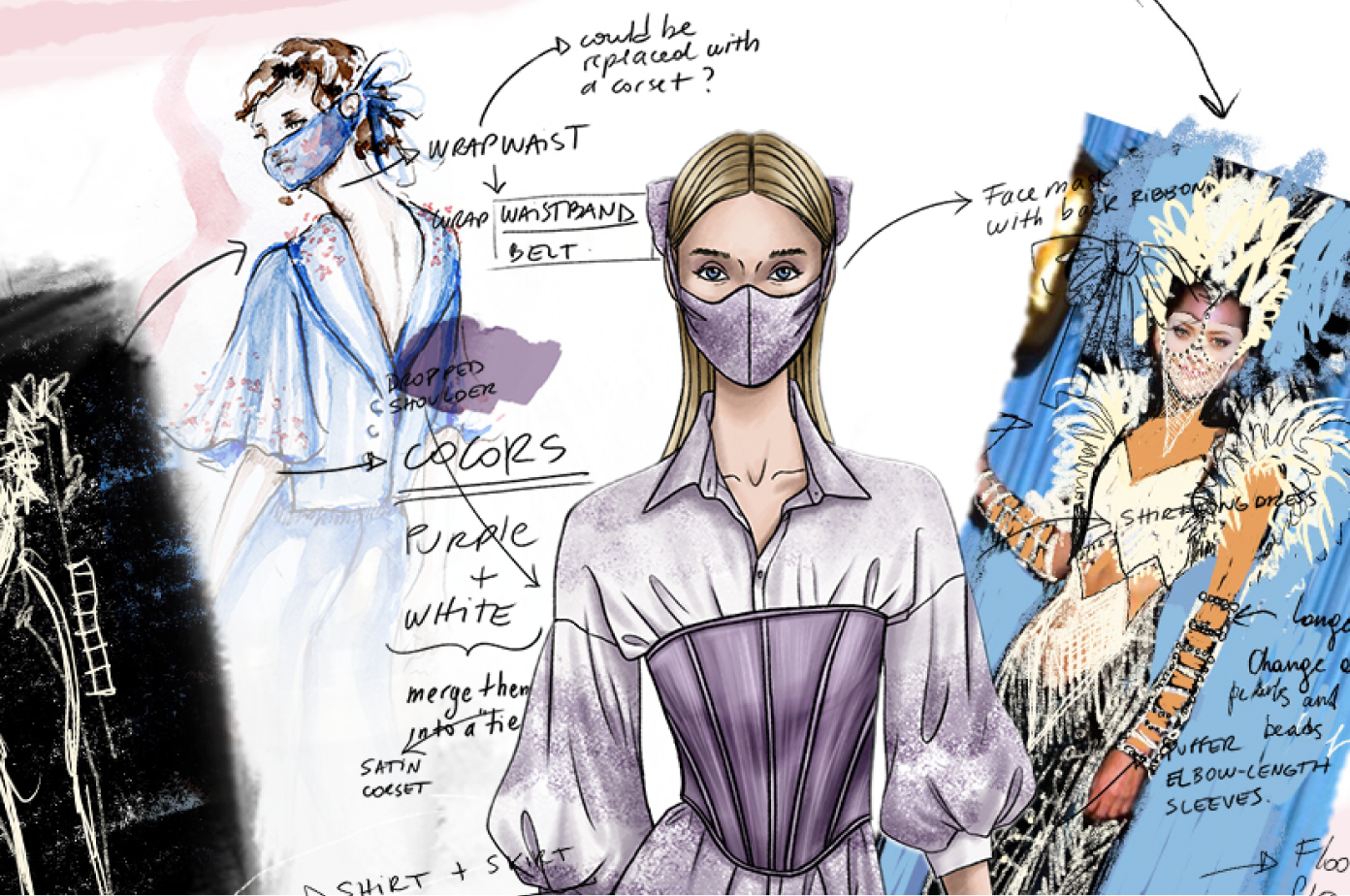 While the traditional awards season calendar has been upended this year due to the ongoing pandemic, the Oscars nonetheless remain a marquee event for the fashion industry and a chance to highlight innovative designers and emerging trends.

In celebration of the upcoming 93rd annual Academy Awards taking place this Sunday, April 25th, we asked Fiverr Fashion designers from all over the world to reimagine some of the most iconic red carpet looks from years past.

We paired each Fiverr designer with an iconic dress, and asked them to reimagine it for one of this year’s 10 nominees for Best Actress and Best Supporting Actress. The designers were also asked to keep in mind the style and personality of the actress, as well as the current moment and climate— Covid-19 safety measures, current fashion trends, and any other sociopolitical issues that may be reflected in the design.

The result: a dazzling virtual collection of would-be Oscar fashions that encapsulate this moment in time.

Nastaran Hashemi reimagined Halle Berry’s iconic burgundy mesh and embroidery dress for Frances McDormand by transforming it into an oversized suit and keeping the look simple and powerful, as befits McDormand’s penchant for baggy silhouettes.

“The revolutionary fashion movements are the ones that simplify and improve functionality. I designed a simple oversized suit with a hoodie, a look rarely worn for events like the Oscars. I balanced it with luxurious materials and silhouettes. We’re living in a world where our health and comfort come before anything else, so when considering that, I added a face shield and hand sanitizer inside the glove.”

“Because of COVID, I designed a long mermaid skirt with a 6-foot train, and added a mask and gloves. I also reduced the size of the headdress to make it more comfortable, since comfort is key during COVID. I also decided to hide the belly of the actress, but kept the original ornamental and triangular lines. ”

The original show-stopping ethereal yellow gown was redesigned into a much more streetwise look that incorporates many elements of Merve Odabasi’s own cultural aesthetic as a Turkish designer. The floral appliques from the original dress are now echoed in the boots and as a chic single tassel earring.

“I combined Nicole Kidman’s dress with my own style. I added traditional Turkish quilt details to create a style that’s never been worn before in Oscars history.”

Comfort, sustainability, loungewear, a monochromatic color scheme, and the new nap dress were the inspiration behind the reimagining of Gwyneth’s original pink gown for Andra Day.

“My idea was to transform a vintage pajamas look from the 1920s into something that would look wonderful on the red carpet. Vegan satin silk and feathers make the look sustainable—and glamorous.”

Celine Dion’s unique backwards tux (widely panned at the time but now beloved in hindsight) was reimagined with a nod to Olivia Colman’s British background.

“The idea of cottagecore—a trend and aesthetic derived from rural English cottages—is prominent in this look. It gives off a vintage, feminine vibe while retaining key elements of the original design. I chose the baby blue aesthetic because it echoes vintage delphite dishes and record players.”

Sharon Stone’s daring two-piece pairing of a GAP t-shirt with a Vera Wang shirt was reimagined as a shirt dress with a corset and puffed sleeves for a youthful, elegant look.

“I included some current trends that helped with deconstructing the original outfit, like tie dye and the corset. I also kept the white and lavender colors throughout. I think this look would work for Vanessa Kirby because she always chooses simple pieces, but with a surprise focal element.”

“While designing, I kept the current pandemic in mind and added some accessories in a humorous way, like a fluffy hand sanitizer derived from the fur coat worn by Hutton. Maria Bakalova clearly has a sense of humor and wears a wide variety of styles.”

The silhouette of Barbara Steisand’s original and shocking see-through outfit was redesigned with inspiration from jeogori, the traditional Korean upper garment.

“I fell in love with the original decorative elements, specifically the white collar and shiny black fabric. I merged those with a Korean aesthetic, as a nod to Youn Yuh-Jung’s background. The final design merges traditional Korean dress with the European tailored sheath dress.”

J.Lo’s white and taupe Grecian Chanel gown was reimagined for Glenn Close with a darker color scheme, while keeping the whimsical side-swept look.

“This look is totally Oscar worthy! Black monochrome, crystals, and volume would make Glenn Close look like a queen. I incorporated obvious trends like gloves and masks (the new norm) but also a mini forearm bag, just because it would not have to be kept away or have to touch other surfaces or people.”

The one-and-only swan dress! Though it was initially considered a fashion disaster, it’s now remembered as one of the most iconic looks of all time. The reimagined look for Viola Davis keeps the swan theme (naturally) but now has organza balloon sleeves and an inverted black color scheme.

“I took into consideration the Blues icon Ma Rainey, the character Viola is nominated for playing, and re-interpreted the dress in black as a celebration of Black culture. Viola is the most nominated black actress ever, and 2021 is the second year where two black women are nominated for Best Actress.

So this dress serves as a symbol of optimism, racial justice, and diversity after the political and cultural issues that emerged in 2020.”

Which design is your favorite? Tell us in the comments below!

When you need expertly-customized garments, fashion illustration, pattern making, technical drawing, or 3D garment design—Fiverr has you covered. Work with one of our professional Fashion Designers and Illustrators.