DTF: An Evening with OkCupid and Wieden + Kennedy 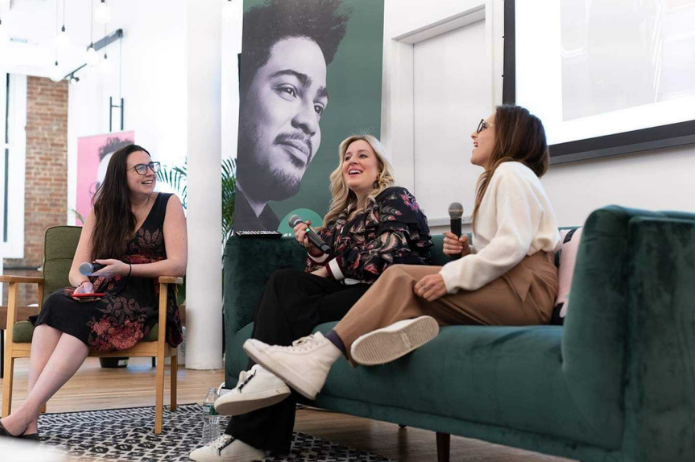 In January, we launched our newest brand campaign celebrating Fiverr connections and how they are improving the way the world works together.Now, more than ever, creative collaboration is key: the connection between freelancer and entrepreneur, agency and client, and generally the creative relationship between any two parties who are building something together.

So we decided to bring together amazing pairs of creative collaborators IRL in a new event series exploring how the independent professionals brought their work and ideas to life, together. We kicked off the “Fiverr Connections” series on January 28th at our New York City HQ with an intimate discussion between Melissa Hobley—CMO of the popular dating app OkCupid—and Jessica Shriftman, Senior Art Director at Wieden+Kennedy. Melissa and Jessica discussed the background and creation of their critically lauded and Insta-famous DTF campaign with a little help from moderator Kerry Flynn, platforms reporter at Digiday. Unique refreshments (CBD-infused carbonated drinks!) were provided by our friends at Recess.

The conversation delved into the nitty-gritty of how a modern ad campaign was developed, from initial insights gathering on how people are dating today (newsflash: it’s not fun!), to campaign planning, creative back-and-forths, media buying, and ongoing PR response.

Though the relationship between OkCupid and W+K was pretty much “love at first sight,” the duo did touch upon important differences they had to work through, including the fact that OKCupid had a more “startup”-based mentality focused on data, numbers and being part of every decision point, whereas W+K was used to dealing with larger, more hands-off clients.

One great lesson learned from the DTF campaign: controversy is not always a bad thing! Hobley mentioned that every time the regional authorities in charge of accepting out of home ads did not approve some of the executions, it made news, which only furthered the reach of the campaign and continued to champion its strongly progressive message. Thank you to our hyper-engaged audience for an amazing turnout and Q+A session, despite the fact that it was the coldest day of the year thus far (-10 degrees)!

We look forward to bringing together more amazing pairs of ‘Connections” at our future events.https://youtu.be/wTsESsb894c

‍Have an idea for a future event? Tell us in the comments below!